On this day in ...
... 2009 (today), is celebrated the multi-day Jewish holiday of Purim. It commemorates how a biblical woman, Esther, saved the people, and is a time for making merry.
... 1914 (95 years ago today), at the National Gallery in London, England, a "woman, producing a meat chopper from her muff or cloak, smashed the glass" encasing a painting, "and rained blows upon the back of the Venus in the painting, the 2-1/2-century-old Rokeby Venus by Diego Velásquez. Authorities "rushed towards the woman, but before they could seize her she had made seven cuts in the canvas." Arrested 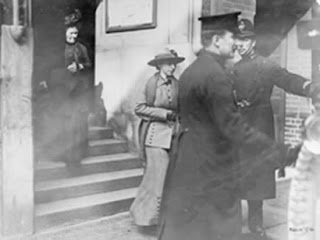 was Mary Richardson (below, center left), a militant suffragist who'd been born 31 years earlier in Canada. (photo credit) She acted in protest of the plight of her jailed suffragist colleague, Emmeline Pankhurst, then on hunger strike in Holloway Prison. Richardson issued a statement that began:

(Prior March 10 posts are here and here.)