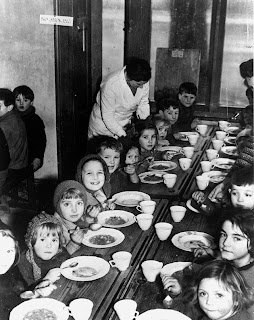 ... 1941, "immediately after receiving it from the Capitol," U.S. President Franklin Delano Roosevelt signed into law the Lend-Lease Act, by which "undisclosed quantities of war materials" were, The New York Times reported, immediately "to be transferred at once from the American Army and Navy to the British and the Greeks, to bolster these powers in their life-and-death struggle with the Axis." The Act, it is said here, served dual purposes of "meeting Great Britain’s deep need for supplies and allowing the United States to prepare for war while remaining officially neutral." Also provided was food, as illustrated in the December 1941 photo at left, which the U.S. Office of War Information captioned "Lend-Lease in Action: Vegetables for British Children." (credit)

(right) had been brought before the International Criminal Tribunal for the former Yugoslavia on charges of genocides, crimes against humanity, and war crimes stemming from the Balkans wars of the 1990s, Slobodan Milosevic died in his cell at The Hague, Netherlands. (AP photo credit) The ICTY ordered the trial against the deceased terminated, without verdict, 3 days later.
(Prior March 11 posts are here and here.)
by Diane Marie Amann at 6:00 AM