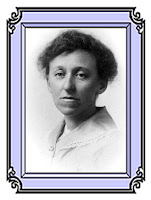 On this day in ...
... 1916, following years of lobbying not only by the city-based Women's Christian Temperance Union and the rural-based Women’s Grain Growers’ Association (founded by Violet McNaughton (right)), but also by the wife of the province's top official, Saskatchewan granted women the right to vote and to run for elected office. The move came a couple months after a similar grant in the neighboring Canadian province of Manitoba.

... 1728, a 15 year old named Jean-Jacques Rousseau fled his native city of Geneva for the Annecy, France, home of Françoise-Louise de Warens (left), 28, who herself had emigrated from Switzerland. The woman known as Mme de Warens already had ended her teenage marriage by annulment. She would become both the tutor and the lover of Rousseau, whose legacy of political philosophy remains evident in concepts such as the "social contract" and the "general will."
(Prior March 14 posts are here and here.)
by Diane Marie Amann at 1:54 AM