On this day in ...
... 1974 (35 years ago today), at a meeting in Vienna, Austria, 7 of the 9 member states of the Organization of the Petroleum Exporting Countries lifted an embargo on selling oil to the United States that had been in effect since October 1973. Only Libya and Syria voted against ending the OPEC ban, which, as The New York Times reported, "had been imposed because of American support for Israel," but which was being eased by evidence that U.S. policy in the region had "'assumed a new dimension.'" 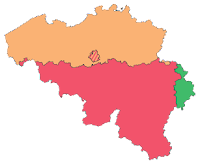 ... 1950, the Belgian government collapsed following a referendum favoring the return, from exile in Switzerland, of King Leopold III. The vote revealed deep divisions among government officials and among regions of the multi-ethnic country (right) respecting the king's actions during World War II: "He had been accused of co-operating with the Nazis and displaying fascist tendencies," and "[h]e surrendered Belgium unconditionally to the Germans in 1940 -- despite the opposition of his cabinet." Today his son, King Albert II, serves as the country's constitutional monarch. (credit for map depicting Belgium's Flemish community in orange, its French community in red, and its German-speaking community in green)