On this day in ...
... 1923, Canada and the United States signed a treaty setting forth fishing rights in the northern part of the Pacific Ocean. This Halibut Treaty was significant because it was the 1st such agreement Canada negotiated and entered in its 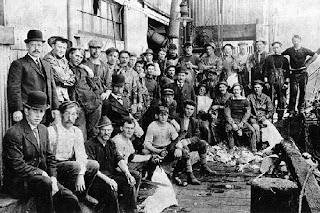 own rather than through its colonizer, Britain. "The Halibut precedent, confirmed by the Imperial Conference of 1923, was an important step towards establishment of Canada's right to separate diplomatic action." (credit for circa 1920 Canfisco photo of halibut unloading crew at the company's Vancouver, British Columbia, plant)
... 1956, in Paris, Christian Pineau, the French Foreign Minister, and Embarek Bekkai, the Moroccan Prime Minister of Morocco (flag below right) signed the Déclaration commune de reconnaissance de l'indépendance du Maroc, or France-Morocco Joint Declaration, in which France

solemnly confirms its recognition of the independence of Morocco -- which implies in particular the right to a diplomacy and an army -- as well as its determination to respect, and to see to it that others respect, the integrity of Moroccan territory, as guaranteed by international treaties.

In so doing France further put an end to the 1912 Treaty of Fez, by which Morocco's ruler had ceded sovereignty to the French.