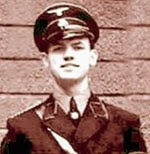 On this day in ...
... 1944 (65 years ago today), at Rome's Ardeatine Caves, members of the Nazi German SS shot 335 Italians dead in reprisal for the deaths of 32 German police officers in a bombing the previous day. The victims were said to range from "from 14 year old boys to 75 year old men," and 75 were Jewish. The caves were then mined. In the 1990s, 1 of the SS officers present, Erich Priebke (right), was extradited from Argentina, where he had been living openly, since, to Italy to stand trial. (photo credit) After 2 trials and much litigation, Pribeke was sentenced to 15 years in prison, of which he was supposed to serve less because of time served. He is now reportedly 85 years old and under house arrest, though a recent article asserted that "Italy lets" him "zoom around Rome on a moped." Jacinto Antón, "La guerra es malísima para la