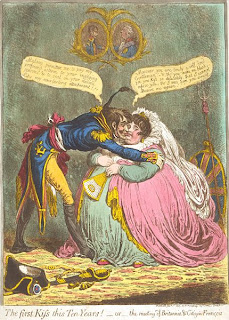 On this day in ...
... 1802, France and Britain signed the Treaty of Amiens, which, as the political cartoon at right illustrates (credit), was intended to be a "definitive" peace accord between the 2 countries. The agreement broke down within a couple years.
... 1994 (15 years ago today), U.S. troop withdrawal from Somalia was virtually complete, with

[o]nly a few hundred marines remain[ing] offshore to assist with any noncombatant evacuation mission that might occur in the event violence broke out that necessitated the removal of the over 1,000 U.S. civilians and military advisers remaining as part of the U.S. liaison mission. All UN and U.S. personnel were finally withdrawn almost a year later in March 1995.

The withdrawal came 5 months after the "Blackhawk Down" incident about which we posted here.