On this day in ...
... 1979 (30 years ago today), in a televised White House ceremony hosted by U.S. President Jimmy Carter, Israeli Prime Minister Menachem Begin and Egyptian President Anwar al-Sadat shook hands to mark the signing of a peace treaty that had evolved out of the Camp David peace accords. The treaty was intended to bring to an end more than 3 decades of hostilities between the 2 countries. (photo credit)
... 1995, the Convention Implementing the Schengen Agreement (sometimes called the Schengen acquis) "took practical effect" nearly a year and a half after it entered into force. The delay was caused be the time it took to put in place "the necessary technical and legal prerequisites such as data banks and the relevant data protection authorities." As described on this official German site, the Convention's 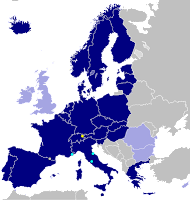 of common border checks, a common area of security and justice. Specifically it is concerned with
► harmonizing provisions relating to entry into and short stays in the Schengen area by non-EU citizens (uniform Schengen visa),
► asylum matters (determining in which Member State an application for asylum may be submitted),
► measures to combat cross-border drugs-related crime,
► police cooperation, and
► cooperation among Schengen states on judicial matters.