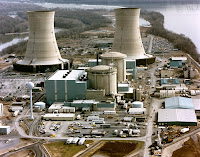 On this day in ...
... 1979 (30 years ago today), about 10 miles southeast of Pennsylvania's capital, Harrisburg, "a water pump broke down at the Three Mile Island nuclear plant," releasing "radioactive steam" into the atmosphere. "[D]escribed as the worst ever at an American nuclear generating plant," the accident initially was said not to endanger workers or area residents -- even though dozens of workers at the plant (left) were contaminated. According to the BBC, "Research released in 2002 showed incidences of cancer in the area were not significantly higher than elsewhere."

... 2003, fewer than 2 weeks after a U.S.-led coalition invaded Saddam Hussein's Iraq, the U.N. Security Council adopted Resolution 1472, which extended the U.N. "oil for food" program by 45 days "to facilitate the delivery and receipt of goods contracted by the Government of Iraq for the humanitarian needs of its people."