On this day in ...
... 1970, Dr. Anna Louise Strong (right) died in Communist China, where she had moved in 1958, at age 72, and had become "one of few Westerners to gain the admiration of Mao Tse-tung." She had been born in Friend, Nebraska, to "middle-class liberals who were active in missionary work and the Congregational Church." After earning a Ph.D. from the University of Chicago at age 23, she became active in child welfare and labor movements, 1st in Chicago and then in Seattle. She was elected the latter city's only woman school board member in 1916. The same year the New York Post hired her to cover a bloody labor dispute in her home state between the Industrial Workers of the World, or Wobblies, and mill owners. She would go on to become a radical writer and pacifist, traveling 1st to the Soviet Union and eventually to the People's Republic of China. 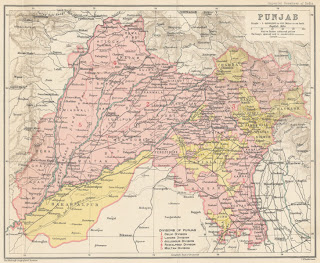 ... 1849 (160 years ago today), just over 2 weeks after the Sikh army had surrendered to it, Britain's East India Company "annexed" the Punjab (left) and rendered it a province of British India, by concluding a treaty with the maharajah of Lahore. (credit for 1909 map)