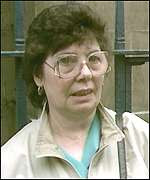 On this day in ...
... 1976, following a 6-week trial at the British courthouse known as Old Bailey, convictions for possession of nitroglycerin, to be used by the Irish Republican Army in bomb-making, were returned against a North London family of 5, plus "a close friend." Among those convicted was Anne Maguire (left), a "40-year-old Irish born mother." She and her codefendants "continually protested their innocence," the BBC noted. They served full sentences, save 1 who died in prison. Then, in "1991 the Court of Appeal quashed their convictions after it was ruled the original evidence against them was unsafe." And in 2005 Prime Minister Tony Blair issued a public apology to the so-called Maguire Seven, as well as codefendants on another case known as the Guildford Four, "for the miscarriages of justice they had suffered. (credit for photo of Anne Maguire on her 1985 release from p

rison)
... 1949 (60 years ago today), in Resolution No. 69, the U.N. Security Council recommended that Israel be admitted as a member state of the United Nations.