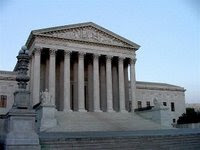 ... 1956, via a 1-sentence per curiam order in Board of Trustees v. Frasier, 350 U.S. 979, the U.S. Supreme Court "upheld a ban on racial segregation in state schools, colleges and universities." It thus rejected a bid by the University of North Carolina for reversal of a 1954 lower court order requiring "college officials to admit three black students to what was previously an all-white institution."

... 1852, at in Roxborough House in County Galway, a daughter, Isabella Augusta, was born to the Persse family. At age 28 she married a widower 35 years h

er senior, and as Lady Augusta Gregory (right) moved with her new husband to London. After his death in 1892, she became interested in all things Irish, and began to study the language and culture of her native island. She founded an Irish school at her Galway-area estate, cofounded the Irish Literary Theatre, and began writing poetry and plays, at times in collaboration with William Butler Yeats, that won much acclaim. She died on May 22, 1932, at her home in Coole Park, Gort, County Galway. (photo credit)