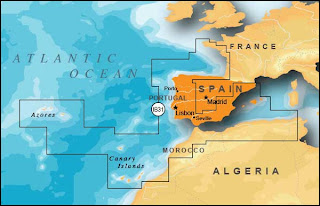 On this day in ...
... 1480, Spain ratified the Treaty of Alcáçovas, which had been concluded in that Portuguese town on September 4 of the previous year. Thus entered into force this bilateral agreement, by which Portugal gave up its claim to the Castillian throne and to the Canary Islands off the coast of Africa. In exchange, Spain "recognized the Portuguese primacy in Azores islands as well the North and West African coasts."

... 1944 (65 years ago today), at Gisborne, on the east coast of New Zealand’s North Island, Kiri Te Kanawa was born. Of Maori ancestry, she was adopted by an Irishwoman and a Maori man. In 1965, having won 2 singing contests, the soprano "was accepted without audition to study at the London Opera Centre." As is evident from the Nozze de Figaro aria below, she became an international operatic star -- a genuine diva. In sang a solo at the 1981 wedding of Prince Charles to Princess Diana. In 1982 Queen Elizabeth II named Te Kanawa a Dame of the British Empire. (photo credit)

ktk is my favorite diva...but not someone who behaves like one in terms of being fickle and hard on others (er...kathleen battle comes to mind?) thanks for featuring her here on grrrlls

rebecca hardin
university of michigan
anthropology and school of environment