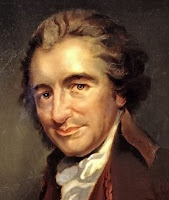 On this day in ...
... 1775, the Pennsylvania Journal and the Weekly Advertiser published African Slavery In America, by Thomas Paine (right), a recent emigrant from England who'd become in America "one of the earliest and most influential" advocates for the abolition of slavery. "[T]he sentiments of JUSTICE AND HUMANITY," he argued in the essay, compelled abolition. Just 5 weeks later, America's 1st anti-slavery society formed in Philadelphia, with Paine as a member. 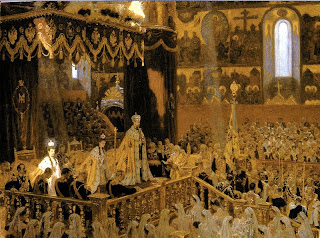 ... 1917, hunger and cold caused rioting in St. Petersburg, Russia. A report cabled to The New York Times predicted: "I do not personally believe there can be serious trouble while the Duma is sitting." Days later, however, Russia's ruler dissolved that parliamentary body; in response, the Duma forced Tsar Nicholas II to abdicate. (credit for portrait of 1896 coronation of tsar and tsarina)

(Prior March 8 posts are here and here.)

I was extremely happy to come across your reference to the anniversary of Paine's pamphlet arguing against slavery. Yours is one of the very few I found on-line. I'm a fifth-grade teacher in Colorado, and an intrical part of teaching civics is providing students with our primary sources: the founding documents. This is critical in understanding what “We the People” really means. Today, as they did over 230 years ago, those documents instill in students the belief that all our voices are important. Everyone of our citizens are given the right to pursue liberty. Futures do not have to be inevitable and "Little voices" can make dramatic impacts on events. That is Thomas Paine's greatest contribution to our country. His pamphlet, Common Sense, spoke to all the voices in the 13 colonies during a time of great fear and indecision. He gave a vast number of citizens a vision of what each could do, 176 days before the Declaration of Independence. A belief that power should radiate from the citizens. That message is still paramount to all our students today. For that pamphlet alone, Paine needs to be recognized as a intrical part of the American miracle.

Mark Wilensky,
author of "The Elementary Common Sense of Thomas Paine: An Interactive Adaptation for All Ages"
www.NewCommonSenseBook.com