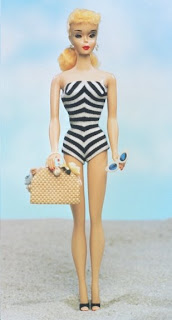 On this day in ...
... 1959 (50 years ago today), Barbara Millicent Roberts was born in Willows, Wisconsin. She was 11-1/2 inches (29 centimeters) long, and would not grow any taller during her half-century of life. Best known by her nickname, Barbie "is the top-selling toy in the world," and "has traveled the world and worked more than 100 different jobs," although, according to International Herald Tribune writer Jessica Michault, "Barbie's real profession is clothes horse." Not so sure that's right. Sure, Barbie's had tons of clothes, beginning with the zebra number at left. But for many a wee girl (and boy) it's the invitation to role-playing, to the trying-on of personalities through the dolls, that's made Barbie and her friends so perennially popular.
... 1973, persons who voted overwhelmingly favored keeping Northern Ireland part of the United Kingdom, in a provincewide referendum boycotted by Roman Catholics.