We’ve blogged before on the principle of legality in international criminal law, the purported inapplicability of statutes of limitation for war crimes and crimes against humanity, the thorny problem of combatant/civilian classification under international humanitarian law (IHL), and existing war crimes under treaty or customary international law. A relatively recent case from the European Court of Human Rights (ECHR--photo at right) Kononov v. Latvia touches on all these issues at once.

The case concerned WWII-era allegations that a commando unit composed of members of the Soviet Red Partisans (propaganda poster at left) attacked a Latvian village that had been occupied by the Germans on suspicion that the villagers had earlier collaborated to expose another commando unit hidden in the village. In reprisal, the Partisans brutally murdered about a dozen inhabitants (some of whom were burned alive) and pillaged their belongings. Mr. Vassili Makarovich Kononov was alleged to have been part of the group, although he claimed that he had not entered the village with his unit because he had been raised there and feared for the safety of his parents. In defense of the actions of his unit, he argued that the victims had all been armed collaborators rather than innocent civilians.
After Latvia’s independence from the Soviet Union was restored in 1990, its Supreme Council on April 6, 1993 amended the Latvian Criminal Code to include provisions criminalizing genocide, crimes against humanity and peace, war crimes, and racial discrimination. In particular, a new Article 68-3 enumerated several war crimes, with a range of sentences up to life imprisonment. The same

legislation included two important provisions:
The applicant (all the other individuals involved had since passed away) was eventually prosecuted for war crimes in violation of the laws and customs of war as contained in Hague Convention of 1907, the 4th Geneva Convention, Protocol I, and the Nuremberg Charter. Much of the evidence introduced at trial, including a draft autobiography, suggested that the defendant played a more active role than he was admitting. Although the trial court convicted him, the judgment was quashed on the grounds that the questions of whether the victims were civilians or combatants and whether the territory had been occupied by the Soviet Union as well as Germany were insufficiently reasoned. On the second go-round, the defendant was convicted of banditry, but acquitted of war crimes, on the grounds that although the operation was carrying out an order from a military court against the victims, the Partisans had exceeded their lawful authority in its execution. Banditry, however, remained subject to a statute of limitations and so the second conviction was also quashed.
On appeal, the conviction for war crimes (specifically acts of treacherous killing, attacks on undefended villages, attacks on family honor, violence to life and person, murder, collective penalties, reprisals, and pillage) was reinstated (although there was insufficient evidence that the defendant himself had murdered or tortured certain individuals so these charges were dropped). The appeals court reasoned that the victims all remained civilians, even if they may have:
The fact that the territory may have been under dual German/Soviet occupation, such that the victims and perpetrators may have shared an effective nationality, was also of no moment. There was no evidence that any of them had performed any military function, and all had posthumously been “rehabilitated” on a finding that there was no evidence they had committed crimes against the peace, against humanity or taken part in political repression by the Nazi regime. The applicant, by contrast, was determined to be a combatant, privileged to participate directly in hostilities by virtue of being a member of a platoon organized and led by the armed forces of one of the belligerent parties. The applicant’s appeal was rejected by the Supreme Court Senate on the ground that the crimes in question were not subject to any statutory limitation and in any case the limitations period had tolled by virtue of Soviet occupation.
Kononov, with Russia intervening, appealed his conviction to the European Court of Human 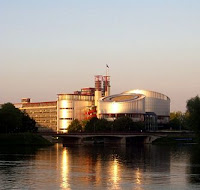 Rights (right), arguing a violation of Article 7, which sets forth the principle of legality and specifically the prohibition against ex post facto legislation. ¶¶ 94-107. In defense of the conviction, Latvia argued that
In a close (4-3) vote, an ECHR Chamber found the prosecution violated Article 7 of the European Convention. On the question of whether the domestic or international law applied to applicant’s acts was sufficiently accessible and foreseeable at the time he acted, the Chamber noted that only the 1907 Hague Convention was in existence during WWII, although neither the USSR nor Latvia had ratified it. Nonetheless, its provisions constituted customary law and were applicable to the “impugned events”. ¶ 120-21. Turning to the facts, the Court ruled that it could not be concluded, especially in light of the domestic courts’ summary reasoning, that the attack in question was not per se contrary to the laws and customs of war as codified within the Hague Convention. ¶ 137. In particular, it noted that the Red Partisans had legitimate grounds to assume that the villagers were not “peaceable inhabitants” under the circumstances, but rather were active collaborators with the German Army. ¶ 130. Accordingly, the villagers must have known that they were vulnerable to attack/reprisal by siding with one of the belligerent parties. ¶ 130.
There is an interesting gendered perspective on this ruling, as the Court considered the conduct of the male and female villagers separately. ¶ 126. With regard to the women, the Court surmised that they too may have lost their civilian status by virtue of “by providing genuine, concrete assistance to [the group] who collaborated with the Nazi occupier” (the women had apparently guarded the barn where the killed Partisans had been hiding while the men went to fetch the German forces). ¶ 139. Had the women’s deaths been due to an abuse of authority, that crime—which existed only under general law—had become time barred and it would be impermissible for Latvia to “revive” liability by later extending the statute of limitations. ¶ 143.
The Court rejected Latvia's retroactive applicability of the definition of civilian or the presumption of civilian status contained in Article 50 of Protocol I; rather, the Court looked to Article 5 of the 4th Geneva Convention, which acknowledges that civilians may lose certain protections if they abuse their civilian status. ¶ 131. The Court also summarily concluded that the act could not be regarded as criminal according to the general principles of law recognized by civilized nations either. ¶ 147. All told, the Court ruled that the accused could not have foreseen that he might be prosecuted for the events in question given the state of international and domestic law at the time. The case is on appeal to the Grand Chamber.
Stay Tuned!
by Beth Van Schaack at 4:41 PM