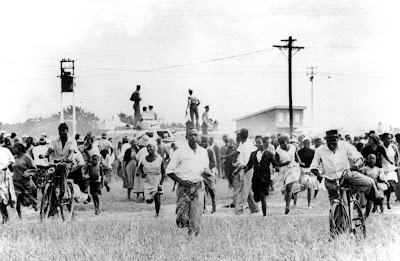 Today, March 21, is the International Day for the Elimination of Racial Discrimination. The day marks the 1960 massacre of nearly 70 people in the Sharpeville township outside of Johannesburg, South Africa, about which IntLawGrrl Diane Marie Amann also posts below.
The 69 persons who died and the 300 who were injured had joined tens of thousands in a peaceful protest of the apartheid regime’s oppressive pass laws; then police “deliberately opened fire on the unarmed crowd.” (credit for photo captioned "Protestors fleeing the Sharpeville Police Station, 21 March 1960")
The U.N. General Assembly declared the day one of remembrance and action in 1966, calling on the international community “eliminate racial discrimination and apartheid.”
Yet more than 50 years after that declaration Navanethem Pillay (below right), the U.N. High Commissioner for Human Rights and herself a native of Natal, South Africa (prior post), reports that “millions of people around the world . . . are still, today, victims of racism and racial discrimination.” Just last year, as IntLawGrrl Jaya Ramji-Nogales posted then, Gay McDougall, the U.N. Independent Expert on minority issues, and Githu Muigai, the U.N. Special Rapporteur on contemporary forms of racism, racial discrimination, xenophobia and related forms of intolerance, called for an end to “anti-Roma sentiment and violence” in Europe. And in the United States, African Americans are reportedly more than 10 times likely to be sent to prison than whites for drug offenses.
Frustratingly, amid this climate of ever-present global racism, states have failed to reach consensus regarding the Durban Declaration and Programme of Action, a comprehensive international program of action aimed preventing racial discrimination. The declaration was the result of the 2001 World Conference against Racism, Racial Discrimination, Xenophobia and Related Intolerance, held in Durban, South Africa, which, though intended to “create a new world vision for the fight against racism in the twenty-first century," was nearly derailed by disagreement regarding Israeli-Palestinian relations.
In the 8 years since Durban, negotiations around the declaration have been fraught with conflict between the parties, particularly with respect to Israel and religious defamation. Next month, from April 20 to 24, country and NGO representatives will convene at the Durban Review Conference in an effort to surmount these challenges and agree on the declaration’s text. To that end, a preparatory committee of UN member states and NGOs recently revised its draft outcome document for the conference by shortening it and converting it into a “rolling text” in hopes of breathing new momentum and confidence into the negotiations. Highlights of the rolling text include calls:
► for U.N. member states to contribute to a Trust Fund for the Programme of the Decade to Combat Racism and Racial Discrimination;
► for special attention to women, refugees and migrant workers suffering from racism and racial discrimination; and
► for renewed calls for ratification and removal of reservations to the Convention on the Elimination of all Forms of Racial Discrimination.
Reflecting upon the document and the challenges facing conference negotiators, Commissioner P

I urge all states to refrain from taking narrow politicized or polemical stances on particular issues, and to work together for the remainder of the process towards a successful outcome for the victims of racial discrimination and intolerance around the world.