Sexual Violence in the ICTR and ICTY: Successes and Disappointments

I have been thinking a lot recently about the progress made from the perspective of women’s distinctive experience of conflict by the ICTY and the ICTR, both of which are soon to complete their work. Although I am somewhat reluctant to engage in any kind of ‘accounting exercise’, where the ‘achievements’ and ‘disappointments’ are lined up against each other and compared, it strikes me that some kind of summarising exercise would be a good idea. 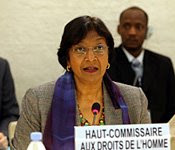 The good:
► (a) sexual violence was included in the statutes of the tribunals themselves following very concerted efforts by international NGOs, their success being what Janet Halley calls ‘governance feminism’ (see her latest article in the Melbourne Journal of International Law on this here);
► (b) significant numbers of women were involved in the running of the tribunals as chief prosecutor (Louise Arbour; Carla del Ponte), as judges (notably Navi Pillay (above) (photo credit), about whom IntLawGrrl Amy Senier also posts today, and Florence Mumba), and as other staff; and
► (c) sexual violence was recognised as the actus reus of other crimes, most notably we recognised in the ICTR that rape could be the actus reus of genocide (Prosecutor v. Akayesu) and in the ICTY that rape could be the actus reus of torture (Celebici Case).
The not so good:
► (a) female victims continue to suffer extreme distress and post-testimony ostracised and abuse after testifying before the tribunals; this can include being subjected to further sexual violence;
► (b) some decisions by the Office of the Prosecutor have been simply baffling, particularly in relation to whether to include sexual violence charges in indictments. Take, for example, the Akayesu indictment which included sexual violence charges only after the presiding judge (Judge Pillay) and NGOs intervened to ask the OTP to consider amending the indictment.
► (c) For quite some time (especially in the early 2000s) there was a clear prosecutorial policy of sidelining sexual violence charges: specialised investigative units were disbanded, clear cases where sexual violence should have been included in the indictment had no such charges and these decisions continue to have repercussions (the Lukic case is an obvious example -- IntLawGrrl Beth Van Schaack discusses it here).
A mixed record then, it is fair to say. Of course, there have been enormous advances and these continue to have positive ramifications in other international and hybrid tribunals (not least in the Special Court for Sierra Leone), and to ignore these would be churlish. But we should also be careful not to overstate progress; identifying the ‘must do better’ areas is vital to the continuing development of international criminal law.
by Fiona de Londras at 6:07 AM