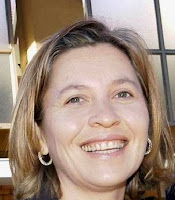 It's IntLawGrrls' great pleasure to welcome as today's guest bloggers Dr. Anne Gallagher (left), Head of Operations for Equity International, a Geneva-based foundation that promotes ethical and lawful policing through technical and tactical training and other practical support to national police forces, and Elaine Pearson (below right), Deputy Director of the Asia Division of Human Rights Watch.
Anne is an international lawyer specialising in human rights and criminal justice. She served as a career U.N. o

fficial from 1992 to 2003; for the last 5 of those years she was Special Adviser on Human Trafficking to the High Commissioner for Human Rights. She continues to advise the United Nations on these matters and has, most recently, completed a legal commentary to the U.N. Principles and Guidelines on Human Rights and Human Trafficking.
In 2003 Anne was appointed to head an intergovernmental initiative, under the Australian Aid program, that aimed to develop more effective criminal justice responses to human trafficking within and between countries of South East Asia. The project works directly with ASEAN and its member states to promote criminal justice approaches that work to end impunity for traffickers and to secure justice for persons who have been trafficked.
Anne has taught as institutions iincluding the NATO Staff College, the European Institute for Human Rights, and universities in Australia, Finland, Switzerland and Thailand. Her publications focus on policing, human rights, women’s rights and human trafficking. Cambridge University Press will publish her book International Law of Human Trafficking later this year.

Like Anne, Elaine also has special expertise in issues related to human rights, human trafficking, and migration. She has published in periodicals including The Nation. As Deputy Director of Human Rights Watch's Asia Division, she supervises work across Asia, especially South East Asia, Nepal and North Korea. Elaine has lived and worked in Asia for 6 years, in cities including Bangkok, Hong Kong, and Kathmandu. Prior to joining Human Rights Watch in 2007, she worked as a consultant to various institutions, among them the

International Labour Organization, the U.N. Development Fund for Women, and Oxfam. She led the first Trafficking Program at Anti-Slavery International in London, was advocacy officer for the Global Alliance Against Traffic in Women. She graduated in law from Murdoch University in Australia.
In their guest post below, Anne and Elaine discuss Detention of Trafficked Persons in Shelters: A Legal and Policy Analysis, their study, prepared under the auspices of ARTIP, the Asia Regional Trafficking in Persons Project, of the practice by which some countries hold victims of human trafficking in shelter custody.
Heartfelt welcome!
by Diane Marie Amann at 6:02 AM