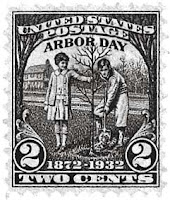 ... 1874 (135 years ago today), the 1st official Arbor Day was celebrated, in Nebraska, by proclamation of that state's Board of Agriculture. "Prizes were offered to counties and individuals for planting the largest number of trees," and it's "estimated that more than one million trees were planted in Nebraska" on that day alone. Over the years the idea took root. The U.S. government celebrates it on the last Friday in April -- this year, April 27. Various states opt for various dates, no doubt in keeping with varied planting seasons. Same holds for countries outside the United States:

Variations are celebrated as 'Greening Week' of Japan, 'The New Year's Days of Trees' in Israel, 'The Tree-loving Week' of Korea, 'The Reforestation Week' of Yugoslavia, 'The Students' Afforestation Day' of Iceland and 'The National Festival of Tree Planting' in India.

It is, after all, the fact, and not the day, of planting that matters.

... 1963, Doris Leuthard (right) was born in Merenschwand, Switzerland. In 2006 Leuthard was elected to the Swiss Federal Council, making her the Council's 5th woman member ever (another, elected in 2002, is Micheline Calmy-Rey, about whom we've also posted). Leuthard is now the Vice President of the Federal Council, which constitutes the executive authority of the Swiss government. She is also Head of the Federal Department of Economic Affairs, and thus in charge of Swiss economic, labor, and trade policies, among them conduct of Doha Round negotiations of the World Trade Organization. An attorney by training, she had been President of Switzerland's Christian Democratic People's Party before joining the Federal Council. (photo credit)