On this day in ...
... 1909 (100 years ago today), Eudora Welty (right) was born in Jackson, Mississippi, to a mother who was a schoolteacher and a father who was an insurance executive. (photo credit) After studying in Mississippi, Wisconsin, and New York, she returned home when her father died in 1931. There her writing career began, initially as a society writer, then as a writer and photographer for the Works Progress Administration, and eventually as a writer of fiction. She traveled to France, Italy, England and Ireland in the late 1940s; and "held extended residences at a number of universities, including Oxford and Cambridge (she was the first woman to enter Peterhouse College)." A bibliography of the works that earned her the title "First Lady of Southern Literature" is here. Events in honor of Welty's centenary (she died in 2001) are detailed here. 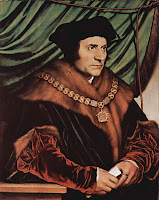 ... 1534 (475 years ago today), Sir Thomas More refused to swear an oath endorsing a new statute declaring the marriage of King Henry VIII and his 1st wife, Catherine of Aragon, void, and for this refusal Moore was put in prison. The dispute, in which More, a Catholic, was seen as an obstacle to Protestantism and to the legitimacy of Henry's 1533 divorce from Catherine and marriage to Anne Boleyn, ended a year later with More's beheading. (portrait credit) The matter was depicted in a mid-20th C. production, A Man for All Seasons.