On this day in ...
... 1954 (55 years ago today), in Britain's East Africa colony of Kenya, more than 10,000 men were arrested and detained in "Operation Anvil," which the BBC called "the biggest anti-Mau Mau operation 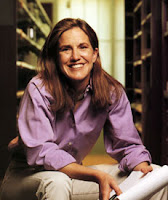 since a state of emergency was declared in Kenya 18 months ago." The detention camps would remain for years; at the height of the crackdown, 80,000 persons were held, and many were subjected to cruelty. In 2005, in Imperial Reckoning: The Untold Story of Britain's Gulag in Kenya, the period was recounted by Caroline Elkins (left), Hugh K. Foster Associate Professor of African Studies at Harvard, who won the Pulitzer Prize for the study. That same year Kenya demanded that Britain apologize.

y-Iceland bilateral agreement by which the former country (flag above right) agreed to shoulder the defense of the latter (flag below right) during peacetime.
(Prior April 24 posts are here and here.)
by Diane Marie Amann at 6:00 AM