On this day in ...
... 1917, Alice McGrath was born in Calgary, Canada. As a child she moved to California with her family in 1922, and 20 years later McGrath (left) was the executive secretary of the Sleepy Lagoon Defense Committee, set up to represent "22 young men, mostly Mexican-American," tried on charges of murder amid a climate of extreme prejudice. In this case on which Zoot Suit is based, a dozen defendants were convicted, but eventually the convictions were overturned and all were freed. As described by ImmigrationProf Blog in a post naming her "Immigrant of the Day," McGrath worked on the defendants' behalf at all stages, both behind the scenes and as a public speaker and fundraiser. McGrath has remained an activist, frequently traveling to and from Nicaragua. McGrath helped support pro bono legal representation in Ventura County, where the nonagenarian resides. 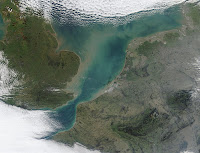 ... 1654 (355 years ago today), having been defeated by the British in battle, Netherlands signed "the humiliating terms Cromwell dictated" in the Treaty of Westminster, which ended the 1st Anglo-Dutch War. Among other things, the Dutch agreed to lower their flag when passing a British warship in the Channel (right) and to pay compensation for the 1623 torture-murder of English merchants in the Moluccas, an archipelago that today is part of Indonesia. (aerial photo credit)
(Prior April 5 posts are here and here.)
by Diane Marie Amann at 12:02 AM