On this day in ...
... 1994 (15 years ago today), Juvenal Habyarimana and Cyprian Ntayamira, respectively the Presidents of Rwanda and Burundi, were killed in a plane crash that some said was the result of rocket fire from the ground. The crash occurred just outside of Kigali, Rwanda's capital, to which the 2 were flying after having taken part in a discussion among African leaders meeting in Tanzania on how "to end the ethnic violence in Burundi and Rwanda." The incident would have the opposite consequence, touching off massacres in Rwanda. Earlier last month the Chief of Protocol for Rwandan President Paul Kagame, Rose Kabuyé (prior post), submitted to interviews by a French investigating judge in connection with charges, levied against Kagame in France, relating to the 1994 deaths. Yesterday Uganda's Daily Monitor reported that she has returned to Rwanda on grant of "'extra-territorial bail.'" The paper quoted Kabuyé as stating upon her arrival back in Kigali "to continue with her duties" as protocol chief:

'After two days of interrogation with judges, I was requested to come back to Kigali. I was granted permission and was also informed that my arrest warrant has been suspended.
'I can continue with my job and travel anywhere in the world unlike before when I had to only travel in Rwanda and France. I am set to go back in the first week of May.'

... 1968, "[d]ozens of major cities in the United States have been rocked by an escalation in the race riots which began two days ago ... provoked by the assassination of black civil rights leader Martin Luther King" Jr., the BBC reported. More than 100 cities would be affected in days of 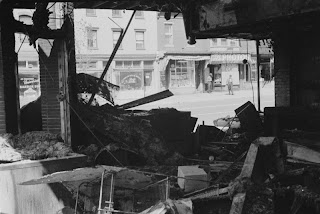 rioting, which resulted in deaths, injuries, arrests, arson, looting and shootings. (credit for photo of riot-damaged store in Washington, D.C.)