'We are all mentally ill and physically damaged.'

So says 84-year-old Kim Kun-ja in a Los Angeles Times article about the home on the outskirts of Seoul where Kim lives with 7 other so-called "comfort women" who endured sexual slavery by the Japanese military during World War II.
Kim says she doesn't want to talk about it any more. But others are willing to replace the voice of this woman, "[f]or years ... among the loudest activists" for 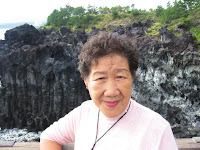 redress. One is 82-year-old Kang Il-chul (below left). (photo credit) She says,

'We have to resolve this problem before we die. We have to go away if God calls us, but until this is solved, I can't close my eyes happily.'

In addition to living at the House of Sharing, part of the Historical Museum of Japanese Military Sexual Slavery, which receives tens of thousands a visitors a year, the women have given witness in other ways. The Times recounts:

The testimony of the women of the House of Sharing is the riposte to those who say there is no evidence that Korean women were forced to sexually service Japanese troops. They gather every Wednesday outside the Japanese Embassy in Seoul or at various South Korean government offices. They unfurl their banners and mostly stand in silence, unflinching as guards snap their pictures. Over 17 years, they have picketed 861 times. Some have traveled to Washington to testify before Congress.

Theirs is a story well worth reading.