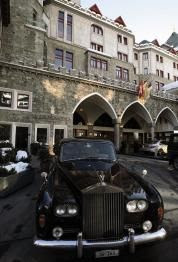 A French NGO has caught an investigator's attention with its complaint about excessive spending by 3 African leaders -- all 3 of whom, it should be noted, hail from countries whose people are said to suffer from human rights violations.
Reuters reports from Paris that a French juge d'instruction has opened an investigation into whether assets held by the Presidents of 3 oil-rich African countries came to them by way of public corruption.
Proceedings could extend to many posh holdings; specifically, in the case of:
► Teodoro Obiang Nguema, Equatorial Guinea's President since 1979, and family: At least 1 property, 1 bank account, and more than 4 million euros worth of luxury vehicles. Among them is the Rolls-Royce Phantom limousine depicted above, said to have been bought by Obiang's son. (photo credit) Obiang has been dubbed among the few "African despots who make Robert Mugabe seem stable and benign" by The Independent of London.
► Omar Bongo, President of Gabon since 1967, and family: 39 properties, 70 bank accounts, and nearly 1.5 million euros worth of luxury vehicles. In January Bongo, the world's longest-serving ruler, was publicly criticized by members of the U.S. Congress for having arrested and otherwise harassed members of civil society who campaign against public corruption.
► Denis Sassou-Nguesso, since 1979 the President of the Republic of Congo (commonly called Congo-Brazzaville to distinguish it from the neighboring state whose capital is Kinshasa, the Democratic Republic of Congo): 24 properties, 112 bank accounts, and more than 172,000 euros worth of luxury vehicles. In Sassou-Nguesso's country, slavery of 1 ethnic group by another is reported to persist.
Judge Françoise Desset decided to open the criminal-finance investigation in what's known in France as l'affaire BMA -- for "biens mal acquis," or "ill-gotten goods" -- based on a partie civile complaint filed in December by a Gabon citizen and Transparence International France, the French chapter of the global nongovernmental organization devoted to fighting public corruption, Transparency International (prior post). Judge Desset made her decision against the advice of the public prosecutor's office. The prosecution, which had declined to act on a inventory of the assets made by French police in 2007, may appeal her decision.
Despite the risk of upset on appeal, the attorney representing the parties civiles, William Bourdon, lauded Desset's initiative:

'This is a decision without precedent, because it is the first time that a judicial investigation has been opened concerning the alleged misappropriation of public funds by incumbent heads of state. From now on it is possible to identify and pursue those who, repeatedly and deceitfully, impoverish their own countries.'

It also suggests a Capone-precedent path to pursuit of leaders who fail to protect the human rights of their own people.
by Diane Marie Amann at 6:01 AM