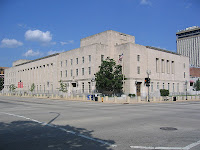 Ali Saleh Kahlah al-Marri, the Qatar-born U.S. permanent resident whom the Bush Administration held in "enemy combatant" detention, pleaded guilty yesterday at the U.S. District Court in Peoria, Illinois (right). The offense: material support for terrorism, punishable by up to 15 years in prison. His plea agreement is here; his sentencing is scheduled for July 30.
The Obama Administration transferred al-Marri early this year once it secured U.S. Supreme Court dismissal of his legal challenge to detention-without-charge. (Prior posts here.) That challenge that had not reached final judicial determination notwithstanding that litigation had dragged on for well over 5 years.
Al-Marri's conviction by guilty plea came just 9 weeks after his indictment in the ordinary federal criminal justice system.
'Nuff said.