The Case of Willie Francis: A Troubling & Inexcusable Precedent for Capital Punishment 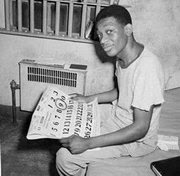 On May 3, 1946, in the small town of St. Martinville, Louisiana, Willie Francis (right), a black youth of seventeen years, sat in the state’s electric chair, strapped in, ready to die. Willie was just like many convicted murderers throughout the country awaiting their punishments – poor minority teenagers stuck in a criminal justice system offering few of the legal protections available today. Yet in a matter of minutes Willie would be plucked from the masses. He would survive the electrocution, taking him from the front of the execution line to front-page news. Time and again, Willie’s experience would be called a “miracle,” a “blessing from God,” or “divine intervention” by layperson and lawyer alike.
Willie’s life narrative – often framed by the themes of race, risk, and religion -- is presented in "When Willie Francis Died: The 'Disturbing' Story Behind One of the Eighth Amendment's Most Enduring Standards of Risk," the chapter that I contributed to Death Penalty Stories (John H. Blume & Jordan M. Steiker eds., 2009). My chapter begins with explorations of 1940s St. Martinville and Willie’s early childhood. These discussions are followed by examinations of:
► Willie’s alleged murder of Andrew Thomas, St. Martinville’s popular white pharmacist;
► Willie’s arrest and interrogation in connection with the murder; the deeply flawed trial that ended in Willie’s conviction; and
► the state’s failed first attempt to execute Willie using the electric chair.
The story includes the fruitless appeals to the Louisiana Supreme Court, the Louisiana Pardons Board, and the U.S. Supreme Court by Willie’s attorneys, Bertrand de Blanc and J. Skelly Wright, the latter of whom would go on to a renowned career on the federal bench. Then follows a chilling re-telling of Willie’s second electrocution, on May 9, 1947, which finally took his young life.
This chapter’s discussion of Willie’s life and death is based on correspondence, interviews, and accounts that have never been revealed elsewhere, as well as on past works. Particularly compelling are numerous letters that people from all over the country wrote Willie while he was waiting in jail. These writers discussed many topics, including their reflections on racial injustice and the need for religious redemption, not only for Willie, but also for his judgers and this country. Yet a number of letters were deeper, more private. Willie, it seems, was not only an imprint of the social and legal times, but also a projected muse of sorts, to whom individuals could confide their heartfelt thoughts and wishes – about God, death, health, hopes, family, even romance.
An epilogue concludes the chapter. It:
► begins with an account of my 2007 visit to St. Martinville, where, through interviews with current residents and remaining members of Willie’s family, the lasting personal impact of the Willie Francis saga is pieced together;
► continues with a history of the rise and fall of the electric chair as a method of execution and of the recent popularity of lethal injection; and
► ends with a critical analysis of Baze v. Rees (2008) (prior IntLawGrrls posts).
The U.S. Supreme Court’s highly splintered plurality decision in Baze relied in part on Louisiana ex rel. Francis v. Resweber, Willie’s 1947 case before the same Court, in order to uphold the constitutionality of Kentucky’s lethal injection protocol. This portion of the epilogue argues that, in light of the passage of six decades, which heralded massive changes in criminal law and procedure, the use of Resweber as modern guidance respecting the Eighth Amendment's ban on cruel and unusual punishments is troubling and inexcusable.
by Deborah W. at 6:01 AM

Thank you! This was very well written and helped me with my history project on the 8th Amendment!