Ebadi on the death penalty 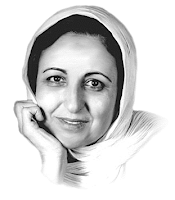 We have been observing a constant deterioration of the human rights situation since 2005. In 2008, for example, we saw that there had been a 300% increase in executions in the prior 3 years! Speaking proportionally, Iran has surpassed even China: there were 355 executions in Iran, a country of 70 million inhabitants; in China, 2,200 executions and 1.3 billion inhabitants. Do the math ....

-- Shirin Ebadi (right), Nobel Peace Prizewinner, in a telephone interview with Le Monde. The Iranian human rights attorney also spoke of the government's closure of her human rights center and harassment of her staff; of the repression in Iran of religious and ethnic minorities such as Bahais, Sunni Muslims, and Kurds; and of how democracy is being "maltreated" in the runup to next month's Presidential election.
With regard to capital punishment, Ebadi not only pointed to overall numbers in the last 3 years, but also to the executions of 26 juveniles and the death row confinement of another 138, 5 of whom are girls. She expressed little hope for reform on this front:

I remain pessimistic, how can I be anything else? We've just learned that last week a couple was sentenced to death by stoning. Anyway, on December 18, 2008, when the U.N. General Assembly adopted a resolution seeking a moratorium on the death penalty, only 46 countries out of 192 voted against it. Among them was Iran ....

As detailed on page 17 of this record of the vote in the General Assembly (above left), also among the countries opposing a death penalty moratorium was China. And the United States.