Garzón goes for it

Losing jurisdiction over a civil-party complaint against 6 U.S. lawyers by the spin of a judges’ wheel in no way deterred Judge Baltasar Garzón (left) from investigating Bush Administration detention and interrogation practices.

In an auto made public this week, the Spanish judge opened an investigation into allegations of torture, made by 4 ex-detainees, over whose cases he had jurisdiction for the reason that they once were charged in Spain with criminal activity in support of al Qaeda. The 4, Garzón wrote,

claimed that they had suffered different acts of physical or psychological violence during the time of their detention in different countries, while they were under the authority of U.S. officials.

Sites named in the auto: Pakistan, Gambia, Afghanistan's Bagram Prison, and the U.S. military base at Guantánamo Bay, Cuba.
A small sampling of the acts alleged by the 4, according to the auto:
► sleep deprivation and harm to vision, both caused by cells lighted all day and all night;
► constant broadcasting of "patriotic American songs" and other loud 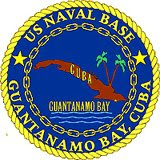 music;
► blows to the testicles and to the head;
► forced nudity;
► introduction of water into the nostrils to the point of a sensation of suffocation;
► subjection to extreme heat or extreme cold;

► protracted confinement in a dark, underground place;
► deprivation of food;
► death threats; and
► sexual assault.
Among the legal bases for the investigation the auto cites are the Spanish penal code, the 3d Geneva Convention, and the international Convention Against Torture and its European counterpart.
It's worth noting that the new case is broader than likely would have been authorized under the civil-party complaint. Whereas the latter named 6 Bush Administration lawyers, Garzón's auto makes clear that "intellectual authors" as well as "material implementers" of abuse, those who "authorized" abuse as well as those who "practiced" it, are fair game for his investigation. And if the Spanish court were to secure the presence of any suspect -- a big if -- personal jurisdiction would lie not only on ground of universality, but also that of passive personality. That's because among the 4 alleged victims are 2 nationals: a Spanish citizen and a Moroccan long resident in Spain.
The sweep of this new case ought not to surprise.
Garzón, of course, is the Madrid-based investigating judge whose name has been a human-rights-household word ever since October 1998, when Garzón asked Britain to arrest former Chilean dictator Augusto Pinochet and then extradite him to Spain to face charges that he was responsible for torture of some Spaniards and many Chileans during his rule. Eventually, in January 2000, Britain’s executive refused to extradite notwithstanding a House of Lords ruling authorizing the transfer.
What had taken place in between – as Garzón described at a Stanford Law panel in which IntLawGrrls Naomi Roht-Arriaza and yours truly took part a while back – was an elaborate game of legal cat and mouse. Spain’s executive, which opposed the pursuit of Pinochet, did little to help Garzón as he went forward. At times Garzón enlisted the language skills of family members in order to secure translations of documents that had been delivered to him in English.
The cat and mouse game may resume, given that Spain's Attorney General has publicly opposed investigation by his country's judiciary of the United States' executive officials.
What might be the endgame?
It is true that Pinochet never did appear before a Spanish judge. But it's also true that when Pinochet went home he found that he was disgraced. By the time Pinochet died in 2006, lawsuits abounded against him. Chilean courts had stripped him of immunity. And he had twice endured questioning by an investigating judge -- not Garzón but Juan Guzmán (below left), a Chilean who sought to link him to some of the same crimes once at issue in Spain. 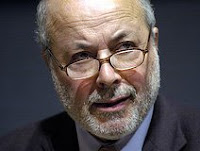 investigation.
by Diane Marie Amann at 12:40 AM

Hi! I am a follower of your blog and you cannot imagine how happy I was with the last resolution of Garzón. I really hope that Fiscal Conde will not challenge the resolution....

Hugs from an IntlLaw Girl from Guatemala