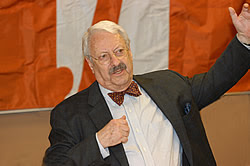 Renowned international jurist Thomas Franck (left) passed away Wednesday after a struggle against cancer.
Others surely will recount Tom's lifework, already noted at the websites of New York University School of Law, where he was Murry and Ida Becker Professor of Law Emeritus, and the American Society of International Law, for which he served both as President and as Editor-in-Chief of the American Journal of International Law. (photo credit) Permit me to sound a more personal note.
I first was introduced to Tom in February 2004, when I had the privilege of commenting, along with several others, on a paper regarding the use of force that he gave at the University of California, Hastings College of the Law, in San Francisco. Tom was visiting at Hastings that semester, and so a week or two later we met for lunch. Topics of our most enjoyable conversation ranged from the war in Iraq then just a year old, to the round-the-clock marriage ceremonies then under way across the street at City Hall, to the fondness we two North Americans shared for the land and people of Ireland.
In the 5 years since, I welcomed the all-too-few opportunities I had to visit with Tom. A warm person, supportive mentor, and inspiring colleague, he will be missed.
by Diane Marie Amann at 12:02 AM

I was an International Law Fellow at NYU, a program Franck began and continued to run for years with passion. He was incredibly generous with his students--spending countless hours helping us master the complexities of international law. And he was truly a "gentleman" in the best sense of the word. He will be sorely missed.