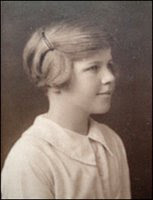 Venetia Burney Phair died on April 30 at age 90 at home in Epsom, south of London, England. As we've posted, she made her mark 8 decades earlier, when as a schoolgirl she suggested that a newly discovered planet be named Pluto. As depicted in the 2008 short film, Naming Pluto (video of trailer below), 11-year-old mythology buff Venetia (left) made the suggestion to her grandfather, an Oxford librarian, who relayed the idea to an Oxford astronomer. The rest is history. Pluto's ignominious 2006 reclassification as a "dwarf planet" by no means dims her celestial achievement. As stated by London's Telegraph, she "had the distinction of being the only woman in the world to have named a planet."

It should be noted that the IAU’s controversial demotion of Pluto is very likely not the last word on the subject and in fact represents only one interpretation in an ongoing debate. Only four percent of the IAU voted on this, and most are not planetary scientists. Their decision was immediately opposed in a formal petition by hundreds of professional astronomers led by Dr. Alan Stern, Principal Investigator of NASA’s New Horizons mission to Pluto. Stern and like-minded scientists favor a broader planet definition that includes any non-self-luminous spheroidal body in orbit around a star. The spherical part is important because objects become spherical when they attain a state known as hydrostatic equilibrium, meaning they are large enough for their own gravity to pull them into a round shape. This is a characteristic of planets and not of shapeless asteroids and Kuiper Belt Objects. Pluto meets this criterion and is therefore a planet.