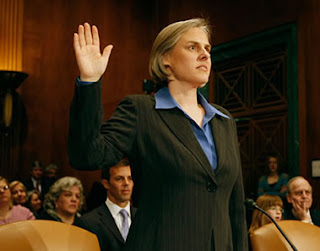 This week U.S. Attorney General Eric Holder listed as "'probably my top priority'" getting Dawn Johnsen confirmed as Assistant Attorney General for the Office of Legal Counsel.
It's about time.
About time, that is, that a top Obama Administration official pushed publicly on this issue.
As we posted about this IntLawGrrls guest/alumna, Dawn (left) was named to head OLC, the branch of the Department of Justice responsible for giving advice on the gamut of legal issues the Executive Branch confronts, 'way back on January 5th. (photo credit) That was more than 2 weeks before President Barack Obama's inauguration, and a day before the swearing-in of the new Congress. But the upper chamber of that Congress has moved at the pace of a recalcitrant snail since then. The Senate Judiciary Committee voted favorably on the nomination, but on a narrow vote of 11 Democrats to 7 Republicans, with then-Republican Arlen Specter of Pennsylvania then abstaining. Since then, nothing -- or rather, as Legal Times' blog reports,"since then Democrats have been trying to cobble together a 60-vote bloc to end debate on her nomination in the full Senate."
That's proved a challenge -- far more than it ought to be for Dawn, whose record as an attorney and law professor is, put simply, stellar. Singing her praises is a spectrum of former Justice Department lawyers that's broad enough to include Reagan-era OLC head Doug Kmiec and his Clinton-era counterpart, Walter Dellinger. The Washington Post endorsed her.
Against her? Specter and Ben Nelson, Democrat from Nebraska, plus, according to Legal Times' blog, "Republicans, foremost among them Sen. John Cornyn (R-Texas)." (A GOP exception: Dawn's won the support of Richard Lugar, senior Senator from Indiana.)
Complaints remain those identified before:
►As legal counsel for the National Abortion Rights Action League, Dawn vigorously represented her client, and so litigated against encroachments on the law of the U.S. Constitution as set forth by the U.S. Supreme Court in Roe v. Wade (1973); and
►As a law professor and former acting head of OLC, Dawn spoke and wrote against the so-called "torture memos," the Bush-era OLC opinions that professed to give legal cover for post-9/11 detention and interrogation practices and policies.
By no means does either of these points constitute a basis for withholding confirmation.
Here's hoping that Holder -- who told a Senate appropriations subcommittee that OLC "is being run by capable layers but required the 'solidity and continuity' supplied by a Senate-confirmed assistant attorney general" -- will keep the pro-Johnsen pressure on.

but her nomination must be a battle line for Republicans, one that only Washington insiders can see.

At least, I don't see the American people backing a filibuster over a non-Cabinet level position, especially not if her opposition to torture is given as the reason the Republicans don't like her.

So the Democrat must know the Republicans are willing to spend an awful lot of capital to fight her.