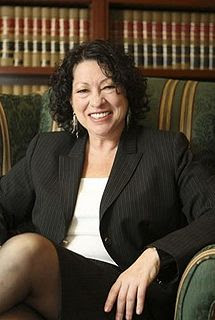 For those interested in the views of Judge Sonia Sotomayor (right) on the place of international law in American courts, a few tidbits. (See also yesterday's IntLawGrrls post on her nomination.)
The New York Times has gathered some of Judge Sotomayor’s notable opinions for the U.S. Court of Appeals for the 2d Circuit and made them available online. Among those collected are two that address issues relating to international law; in each, she presents a crisp analysis of the relevant demands of international law and foreign relations:
► Her dissenting opinion in Croll v. Croll (2000), arguing for an interpretation of the Hague Convention on the Civil Aspects of International Child Abduction that accords with its object and purpose (the classic method of treaty interpretation in international law). Specifically, she takes the position that

[w]hile traditional American notions of custody rights are certainly relevant to our interpretation of the Convention, the construction of an international treaty requires that we look beyond parochial definitions to the broader meaning of the Convention, and assess the ‘ordinary meaning to be given to the terms of the treaty in their context and in light of [the Convention’s] object and purpose.’

(quoting the Vienna Convention on the Law of Treaties)
► Her dissent from the denial of rehearing en banc in Koehler v. Bank of Bermuda (2000), contending that the appellate panel should not have adopted an understanding of what it means to be a “citizen or subject of a foreign state” that would leave residents of Bermuda and other similarly situated territories of the United Kingdom effectively stateless and outside the alienage jurisdiction of the federal courts. She describes this conclusion as “flawed and internationally troublesome,” noting its deleterious effect on “our relations with foreign nations, and the access of foreign entities and individuals to our courts.”
Judge Sotomayor also wrote a brief foreword for The International Judge: An Introduction to the Men and Women Who Decide the World's Cases (2007), a book based on interviews with 32 judges on international tribunals. Here, she carefully elides the hot-button question of “the appropriate role that international and foreign law should play in American constitutional adjudication” for an alternative query:

how much we have to learn from international courts and from their male and female judges about the process of judging and the factors outside of the law that influence our decisions.

In considering this question, she draws parallels between the challenges faced by the international judges described in the book and those that she and her colleagues on the federal appellate bench must likewise address, noting particularly the difficult necessity of remaining impartial in “cases that touch our passions deeply.”
She also offers some insight into her view of the mechanism by which judges fulfill their role:

[A]ll courts… are in large part the product of their membership and their judges’ ability to think through and across their own intellectual and professional backgrounds, to reach some juncture of consensus and cooperation in which a common language is used to articulate the rules and norms that bind their communities.