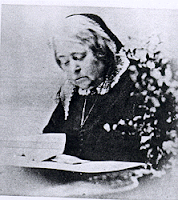 On this day in ...
... 1804 (205 years ago today), Elizabeth Palmer Peabody (right) was born in Massachusetts, to a father who was a doctor and a mother who ran a school at the family home. (photo credit) Eventually Elizabeth became her mother's assistant. (It is telling that despite the influence of her mother, on her death 89 years later, her New York Times obituary mentioned only her father.) She opened many schools from 1820 on. In 1860, a year after learning of the work of "German educator Friedrich Froebel, who had worked with very young children and formulated an approach based on organized play, the use of the hands and the senses, and involvement with nature," she "established the first formally organized American kindergarten." She would spend much of the rest of her life advocating, "with missionary zeal," early childhood education. This, however, was but 1 of her causes: Peabody was a "[t]eacher and educational reformer," an "abolitionist, opponent of European autocratic despotism, friend of political refugees," and an "advocate of Native American rights and education, of woman's suffrage, and of world peace." 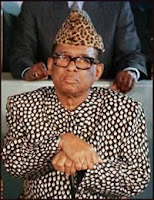 ... 1997, President Mobutu Sese Seko went into exile, bringing to an end 3 decades of dictatorial rule in Zaire, and leaving the capital of the country, known today as the Democratic Republic of Congo, to rebels who were by then within 5 miles of the capital, Kinshasa. Mobutu (right) would die in Morocco less than 1/2 a year later, felled by prostate cancer at age 66.