[M]ore alert American and British governments might have brought science and technology to their aid in mitigating some of the problems presented to them by Egypt, the Suez Canal, and the dependence of Western Europe on the oil of the Middle East. A fraction of our investment in the space program put into the development of a practicable 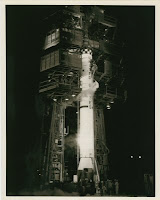 electric automobile and of nuclear power plants here and, with European cooperation, in Europe could do much to solve our air pollution problems and free Europe from dependence upon the Middle East .... The investment still seems to me a profitable one for Europe and the United States for their own welfare and security and for world peace.

(left) in 1969, concluding ch. 58 of the 1st edition of his memoir, Present at the Creation. Subtract some of his optimism about the promise of nuclear power. Multiply "the Middle East" beyond Egypt. And add China, India, much of the developing world, and the United States itself to the list of oil-thirsty countries. The sum of those parts? A statement that stands pretty much on its own fully 4 decades after it was written.