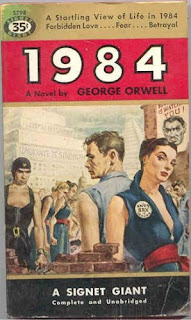 ... 1949 (60 years ago today), George Orwell's novel 1984 was published in England; it appeared in the United States 5 days later. A recent article in London's Guardian provided the backstory and legacy of this antitotalitarian masterwork, to which we owe concepts like "Orwellian" and "Big Brother." 1984 began with appropriate portent:

It was a bright cold day in April, and the clocks were striking thirteen.

... 1998, Maria Reiche died of ovarian cancer in Lima, Peru. Born in Dresden, Germany, in 1903, Reiche (top right) (credit) 1st came to that South American country in 1932 to work as a governess for a German diplomat. Eventually she began to collaborate with a U.S. archeologist, researching a series of geoglyphs (bottom right) (credit) that had been scratched into

desert and pampas soil sometime between 500 B.C. and 500 A.D. In The Mystery on the Desert (1949), Reiche set forth her astronomy-related theories on why the geoglyphs had

been made. In 1994 these Lines and Geoglyphs of Nasca and Pampas de Jumana were inscribed as a UNESCO World Heritage Site.