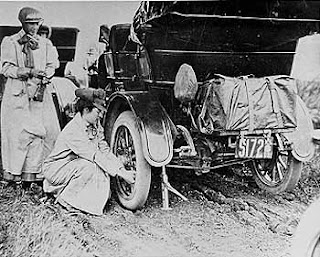 On this day in ...
... 1909 (100 years ago today), 4 women rode out of New York City in a Maxwell touring car. "Forty-one driving days, 11 tires and 3,800 miles later they arrived in San Francisco, where they were met by a large fanfare celebration." Along the way the adventurers -- the driver, 22-year-old wife and mother Alice Huyler Ramsey, became the 1st woman ever to drive from coast-to-coast -- dealt with bad roads and weather, flat tires and car breakdowns, native Americans hunting jackrabbits and a posse of more recent settlers hunting an accused murderer. Ramsey described the trip in her book Veil, Duster, and Tire Iron (1961); she became the 1st woman to be inducted into the Automotive Hall of Fame in 2000. (credit for photo of Ramsey changing a tire during the 1909 sojourn)

... 1999 (10 years ago today), Serbia and NATO reached an agreement on Serb military withdrawal from Kosovo. Troops from the North Atlantic Treaty Organization had begun an intervention in the region in March of the same year. Today Kosovo is a nation-state recognized by some countries -- among them the United States, Christopher Dell just having been nominated as the 2d U.S. ambassador to Kosovo -- but not, by any means, by Serbia.