On the Legal Adviser of the State Department 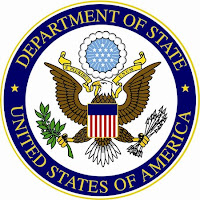 With the full Senate vote on the nomination of Harold Hongju Koh (below right) to come at some as-yet-unspecified date -- last week, by a 12-5 vote, Koh won Foreign Relations Committee approval -- it seems a good time to reflect on the position for which he's been nominated.
Reflection is much aided by The Role of the Legal Adviser of the Department of State, prepared by the 29 men and 5 women who composed a joint committee of the American Society of International Law and the American Branch of the International Law Association. Aiding the committee was an advisory group comprising 8 men and 1 woman. ASIL's made the timely decision to place the report online at its website; originally it appeared in a 1991 edition of the American Journal of International Law.
The report provokes much thought, and not just for its recommendations on how to strengthen the Office of the Legal Adviser:

► Worth pondering is the examination of the Legal Adviser's role -- as one who "operates within the framework of two separate legal systems," domestic and international, as one whose advice to client "may significantly affect the content and integrity of international rules and institutions," and as one who, because decisions typically are not subjected to judicial review, encounters "only relatively weak external checks."
► Of particular importance is its acknowledgment of the difficulties of assuring that international law is supported, not just in the State Department, but throughout all agencies of the U.S. government. (It's an observation that would seem prescient post-9/11 were it not for the report's reminder that formation of the joint committee had been motivated by concern -- in 1988 -- "that in recent years the United States has taken a number of actions that have been widely questioned on legal grounds both within the United States and by foreign governments in international bodies.")
► Also timeless is the report's conclusion:

... [T]he United States and other nations making up the global commmunity are together facing urgent and complex challenges -- problems of nuclear proliferation, poverty and hunger, environmental degradation, resource depletion, ethnic and religious conflict, and rapidly shifting patterns of global political and economic power. Yet at the same time we stand on the threshold of extraordinary opportunities -- an end to the Cold War, new possibilities for cooperation among the great powers, the resurgence of democratic values, growing international recognition of human rights, and the vast promise of rapidly-developing technology. ...
The Legal Advisor of the Department of State, as well as other U.S. government attorneys involved in international legal issues, will continue to carry heavy responsibilities for safeguarding and furthering our national interest in international law. ...