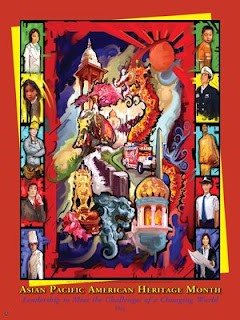 On this day in ...
... 2009 (today), is celebrated the 1st day of Asian/Pacific American Heritage Month. Commemoration began with a 1977 congressional resolution setting aside 1 week, and became a month-long event by law passed in 1992. The Library of Congress explains:

The month of May was chosen to commemorate the immigration of the first Japanese to the United States on May 7, 1843, and to mark the anniversary of the
completion of the transcontinental railroad on May 10, 1869. The majority of the workers who laid the tracks were Chinese immigrants.

The theme for this year's observation is "Leadership, Diversity and Harmony — Gateway to Success." (image credit)
... 2006, "[h]undreds of thousands of immigrants and their supporters skipped work, school and shopping ... and marched in dozens of cities from coast to coast," The New York Times reported. That May Day 2 years ago had been "billed as a nationwide economic boycott 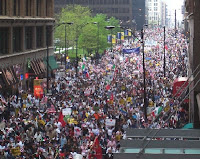 under the banner 'Day Without an Immigrant,'" but turned "into a sweeping round of protests intended to influence the debate in Congress over granting legal status to all or most of the estimated 11 million illegal immigrants in the country." (credit for photo of 2006 march in Chicago) Immigration law reform was not forthcoming, however, and as our colleagues at ImmigrationProf Blog have reported, the May Day Campaign continues.
(Prior May 1 posts are here and here.)
by Diane Marie Amann at 6:00 AM