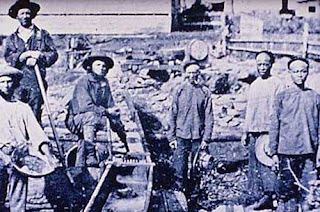 On this day in ...
... 1869 (140 years ago today), at the 2d hour of the afternoon at Promontory Summit, Utah, a golden spike was driven into a rail, marking the completion of the 1st transcontinental railroad in the United States. Built in large part, as we've posted, by immigrants from China and Ireland (left) and other European countries, as well as freed former slaves and veterans of the Civil War, the railroad connected the East and West Coasts of the ever-growing country. (photo credit)
... 1946, Dr. Biruté Galdikas (below right) was born in Wiesbaden, Germany. She would grow up in Canada, and then earn a Ph.D. in anthropology frm the University of California at Los Angeles.

She, along with Dian Fossey (transnational foremother of IntLawGrrls' guest/alumna Annecoos Wiersema) and Jane Goodall -- known together as the "angels" of their mentor, paleontologist Louis Leakey -- were among the most renowned researchers of the great apes. (photo credit) Galdikas is an expert in primatology, and has spent much of her life studying the endangered orangutan that inhabit the tropical rain forests of Borneo and Sumatra, both islands of Indonesia. She has written a memoir, Reflections of Eden: My Years with the Orangutans of Borneo (1996).
(Prior May 10 posts are here and here.)
by Diane Marie Amann at 6:00 AM

...and Jane Goodall ...were among the most renowned researchers of the great apes.I would be very interested in whether the fine Dr. Biruté Galdikas would appreciate being lumped together with the discredited Jane Goodall, who fed her animals (provisioned).

As you can imagine, it is very difficult (and dangerous) to keep up with primates in the wild.

But feeding them, story goes, got her around that obstacle and in turn created a nightmare for all the researchers who followed, because they couldn't clock as much as much time in safe places or write the juicy reports.

In any event, I could not say that at Berkeley Jane Goodall is esteemed.

Thanks so much for this important corrective, Redwood.