On this day in ...
... 868, according to French WikiPedia, the 1st book was published in China. Entitled "Diamond Sutra," at its end it showed the date of publication and the name of the author, Wan Jie. 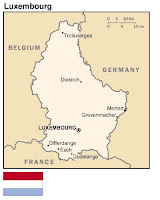 ... 1867, by agreement reached at London, England, among the then-Great Powers, Luxembourg became an independent nation-state. This development ensued after a plan by the Prussian monarch to sell Luxembourg (left), a grand duchy to Napoleon III of France soured when the Prussian Chancellor, Otto von Bismarck, disapproved. "The grand duchy’s perpetual neutrality was guaranteed by the Great Powers, and its sovereignty was vested in the house of Nassau."