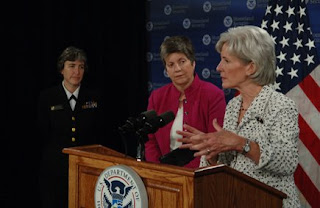 On this day in ...
... 1948, Kathleen Gilligan was born in Cincinnati, Ohio, where her father was the state's Governor. Eventually she moved to Kansas, where she earned a master's in public administration, Democrat Kathleen Sebelius (above right) served as a member of Kansas' House of Representatives for 8 years and as the state's Insurance Commissioner for another 8 years before being elected Governor of Kansas in 2003 -- a post she held until this year. On April 29, Sebelius was sworn in as the 21st Secretary of Health and Human Services. (credit for photo of Sebelius at her 1st HHS press conference, respecting the flu outbreak; with her are Rear Admiral Anne Schuchat, M.D., of the Centers for Disease Control, left, and Homeland Security Secretary Janet Napolitano, center)

... 1991, French President François Mitterand named Édith Cresson (left), who'd already served as his Minister of Agriculture, Minister of External Trade and Tourism, Minister of Industrial Restructuring and External Trade, and Minister of Foreign Affairs, as France's 1st -- and to date only -- woman Premier. Her tenure was not a success, and she would resign in 1992.