On this day in ...
... 1904 (105 years ago today), in Paris, France, diplomats from that country as well as Britain, Germany, Belgium, Denmark, Spain, Italy, the Netherlands, Portugal, Russia, Sweden and Norway, and Switzerland, signed the International Agreement for the Suppression of the "White Slave Traffic", the quotes indicating the then-in-use term for the trafficking of women and girls across national borders for purposes of the sex trade. The agreement entered into force on July 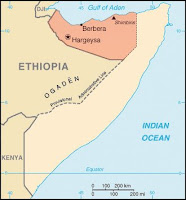 18, 1905.
... 1991, upon the collapse of centralized government in Somalia, leaders in the country's northwesternmost territory (depicted in salmon at right, bordering Ethiopia, Djibouti, and the Gulf of Aden, comprising, much of the former protectorate of British Somaliland), proclaimed the independent Republic of Somaliland. The region has operated with considerable autonomy since that date, and maintains some "political contacts" with a handful of countries, but has never received international recognition as an independent state.