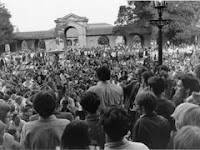 On this day in ...
... 1969 (40 years ago today), crackdowns across the country began to quell student protests launched on May Day. At Columbia University, for example, "200 students calling for educational reforms at Columbia University have given up their sit-in after a supreme court judge issued a warrant for their arrest." Parents whose children were named in the order were divided on the protests. And at Stanford University, a "hundred pacifists have also abandoned their demonstration ... after they were met with an equal number of police officers." (credit for photo of Stanford protests in "1960s and 1970s") Nonetheless, the BBC reported,

[M]any universities remain under siege with both black and white students demanding an end to alleged racial discrimination, on-campus military recruitment and a greater share in college government.

... 1969 (40 years ago today), at Southampton, England, the Cunard ocean liner Queen Elizabeth II embarked on its maiden voyage, bound for New York City. The vessel (right), which in 1982 was requisitioned for service in the Falklands/Malvinas War, "is currently docked permanently in Dubai," in the United Arab Emirates.
(Prior May 2 posts are here and here.)
by Diane Marie Amann at 12:30 AM