On this day in ...
... 1979 (30 years ago today), the newly formed National Assembly of Namibia abolished racial discrimination. The body was not recognized internationally, and Namibia (flag at left), which had been under control of South Africa's apartheid regime for much of the 20th century, would not gain full independence until 1990. 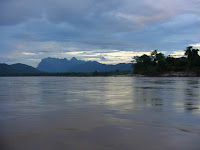 ... 1997, the U.N. Convention on the Law of Non-Navigational Uses of International Watercourses was adopted. It sets out a framework for conservation of surface and groundwater that crosses international boundaries. The treaty has not yet entered into force. (credit for photo of Mekong River, which runs through China, Burma, Thailand, Vietnam, Laos, and Cambodia)