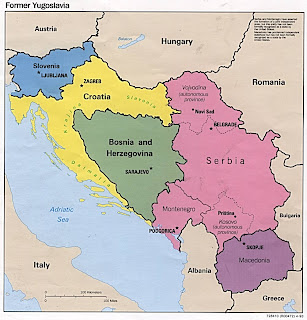 ... 1992, the General Assembly resolutions admitted 3 new U.N. member states, Bosnia, Croatia, and Slovenia. All formerly had been part of the state then known as the Socialist Federal Republic of Yugoslavia, but broke off, following armed conflicts of varying length and brutality, in the aftermath of the 1980 death of Yugoslav leader Josip Broz Tito, who'd ruled the SFRY with an iron hand since 1953. (map credit)

... 1762, the empires of Sweden and Prussia concluded the Treaty of Hamburg, bringing an end to conflict between the 2 countries during the Seven Years War (1756-63) and returning to the territorial status quo as it had existed between those countries before that war began. The alliance was desired by Prussia after it had broken off relations with the Russian empire.