On this day in ...
... 1889 (120 years ago today), a daughter and only child was born to a couple in a "'little one-room shack'" in Woodsdale, Kansas. As detailed in this superb biographical paper, the family 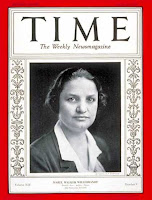 then moved to Missouri then took part in the Oklahoma land rush, and then moved to Michigan. They made their living as printers, newspaper publishers, and farmers, among other occupations. The daughter at 1st was home-schooled, then completed a 2dary school. She began teaching, marrying the principal at a school where she taught. The couple moved to Los Angeles. The marriage collapsed. In 1916 Mabel Walker Willebrandt (left) earned her law degree from the University of Southern California. At age 32 she became the 2d woman U.S. Assistant Attorney General, holding the post from 1922 to 1929. She served with zeal during the period that the 18th Amendment banned alcoholic drinks, and so earned nicknames such as "Prohibition Portia." She died in 1963.
... 1929 (80 years ago today), during the height of popular fascination with aviation, Canada's first airborne wedding ceremony took place, in a biplane over Regina, Saskatchewan.
... 1950, U.S. Rep. Dina Titus (D-Nev.) was born in Thomasville, Georgia. She'd taught political science at the University of Nevada-Las Vegas for 30 years, and served in the state Senate for 20, before being elected to Congress in November 2008.