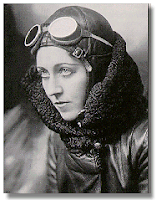 On this day in ...
... 1930, Amy Johnson (right), a 26-year-old British typist, landed in Darwin, making her the 1st woman ever to fly solo nonstop between England and Australia. The 14,000-kilometer, 19-1/2-day flight in a biplane won her a £10,000 newspaper prize and instant international celebrity, the latter evident in this video clip of her subsequent stop in Brisbane -- a clip described as "possibly one of the earliest examples of celebrity mobbing recorded on an Australian newsreel." Following this feat Johnson became a commercial pilot. When World War II broke out in 1939, Johnson, ineligible to serve in the Royal Air Force because of her sex, joined its support service, the British Air Transport Auxiliary. On January 5, 1941, during a routine flight ferrying aircraft from factory airstrips to RAF bases, Johnson's plane crashed into an estuary of the Thames River, and she was drowned.

... 1994 (15 years ago today), the 4 men convicted of the 1993 bombing of the World Trade Center received terms of 240 years each, without parole, from the U.S. District Court in Manhattan. The car bomb had damaged an underground garage (left), killed 6 persons and injured a thousand more. (photo credit)