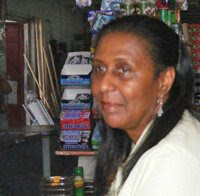 On this day in ...
... 2005, Dr. Ruth Wijdenbosch was re-elected to the Parliament of Surinam. She was brought to IntLawGrrls' attention last summer by a comment that told how Wijdenbosch (right) was instrumental in securing Surinam's accession to the Rome Statute, making it the 107th state party to the International Criminal Court. On the 10th anniversary of the Rome Statute in 2008, Wijdenbosch delivered a speech in which she: told of her record as a human rights convener in Suriname's post-dictatorship era; spoke of the need for a permanent international court "to protect individuals and groups if the national judicial systems are not able or willing to do so"; and expressed her opposition to Bush Administration efforts to secure for the United States bilateral immunity agreements. (photo credit)
... 1961, in a speech broadcast nationally on radio and TV, U.S. President John F. Kennedy declared:

'I believe that this nation should commit itself to achieving the goal, before this decade is out, of landing a man on the Moon and returning him safely to Earth.'

Thus began a multibillion-dollar space program that would culminate in the also-televised July 20, 1969, moonwalk of NASA astronaut Neil Armstrong, depicted in the video below.